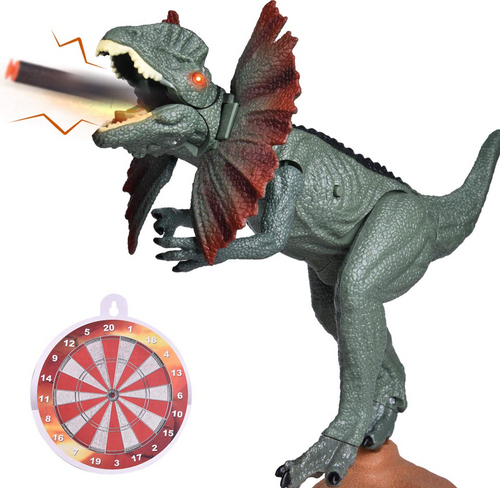 2 in 1 T Rex foam dart toy pistol is a new conception dinosaur toy for kids and fun for all ages dinosaur lovers. This dinosaur toy is not only an ordinary T Rex model, but also a dinosaur toy gun that equipped with 4 foam darts, a target and a dinosaur bracket. Test your aim with the safe darts. Take foam dart from holder, simply load it into his mouth then push his tail back to load, and pull his leg! You re ready to shoot! The darts shoot over 10 feet. Featuring LED light up eyes and a mighty roar, this T Rex dinosaur figure will be a perfect decoration to put on your desk, shelve and child s bedroom. Dinosaur lovers will thrill at receiving him as Christmas gift, birthday gift or any holiday celebration present. Intended for ages 3+ kids.